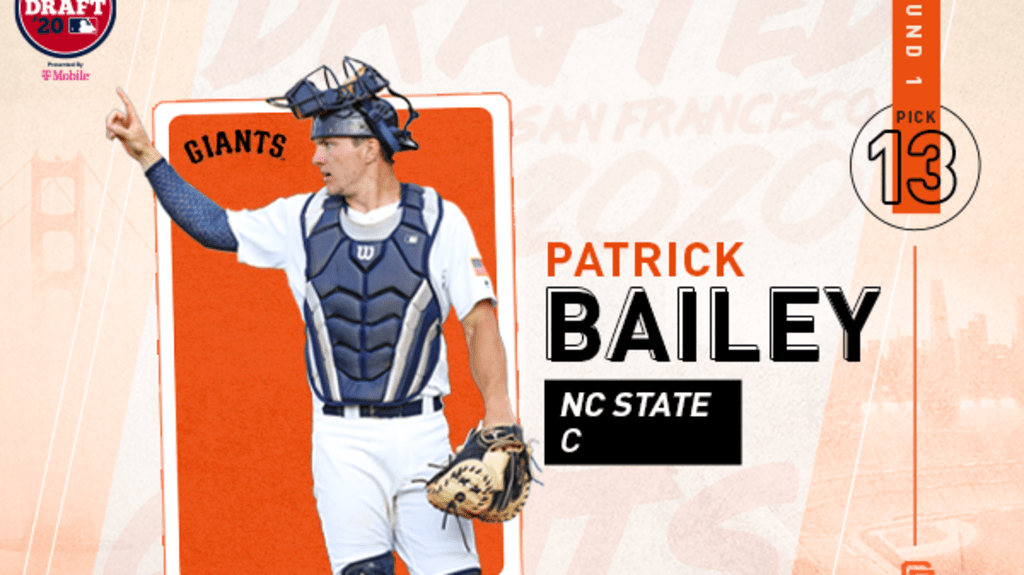 The Giants selected catcher Patrick Bailey out of North Carolina State University with the No. 13 overall pick in the 2020 MLB Draft. Bailey is the top-ranked catcher in this year's Draft, as well as the No. 17 overall Draft prospect according to MLB Pipeline. Growing up, he modeled his game after the Cardinals' veteran catcher, Yadier Molina.

Bailey is a switch-hitter, and homered from both sides of the plate twice in his career at NC State. He was the ACC Freshman of the Year in 2018, after he set a school record with 13 home runs as a freshman. Last year, he was a semifinalist for the Buster Posey Award, given to the nation's best catcher (the No. 1 overall pick in the 2019 Draft, Adley Rutschman, won the award, named after the current starting catcher for the franchise that drafted Bailey).

San Francisco opened Day 2 of the Draft by using their second-round pick on San Diego State's Casey Schmitt, who was ranked the top two-way college player in this year's class. Schmitt was announced as a third baseman, but he also moonlighted as a closer for the Aztecs. The Giants then received back-to-back compensation picks for losing Madison Bumgarner and Will Smith to free agency, which they used to draft North Carolina State left-hander Nick Swiney and Dallas Baptist shortstop Jimmy Glowenke. They completed their draft haul by selecting pitchers in the final three rounds, tapping Harrison, Arizona State reliever R.J. Dabovich in the fourth round and Le Moyne right-hander Ryan Murphy in the fifth round.